Disclaimer- Again, this is all new to me, so enjoy it. I promise it will get better and better every week. My camera skills, writing skills, and comedy skills will hopefully increase as time goes on! 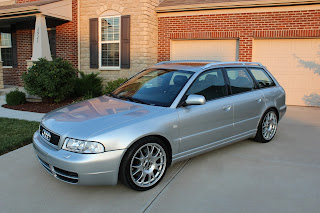 A few years ago, the wife and I decided it was time to move to a bigger house. We wanted to start a family, and our current house wasn't going to cut it. Within the first few months of moving in, I started to figure out the surrounding people. You all know what I mean.... spying on the neighbors! A window shade peak here, a look over the shoulder there, and let us not forget, the awkward "wave at the new guy" return waves. Moving in during winter is tough on the new people. You never run into the neighbors while cutting grass or getting mail. After a few months, I noticed something us car enthusiasts always wanted. A hood full of car buffs. We seemed to have planted ourselves right in the middle of the madness, which led me eventually to where we are today, having strangers like you read a story written by some random dude at home dreaming of how he can make it big to buy the new R8 or 911 Turbo. Cars In My Driveway was born.

I decided to start with one of those buffs in the hood who shared the same passion for cars. I first noticed him driving a Fiero, which was odd because I haven't seen one of those since the last time I watched Ferris Buellers Day Off. You are laughing right now because you just remembered his sis drove a Fiero. But then, I saw him cruising down the street in a SC300 Lexus which I never really liked when they came out. Something was different with the Lexus though. Long story short, 6 speed 2jz (no shit) big turbo conversion. Talk about sleeper.

One day, the Fiero was gone, and its replacement? Probably the most sought after car by Audi enthusiasts. The B5 S4 Avant with the man pedal! 6 speeds of biturbo goodness. Most will say this car is one of the most understood in the Audi history, behind the B5 RS4 Avant, which wasn't sold here. The outsiders would say, "It's a wagon, a grocery getter, a car for the wife!" Audi fans would call it the "Sleeper." A very easy tunable car that nobody expects to be fast.

So I finally meet the neighbor. Let's call him Brian. Brian and I chatted for a while about the car, his other rides, and even the Austin Mini he couldn't wait to get out in the summer. I asked him where that car was. "In the basement."  Not kidding here, a few steps down and hello seriously modded Mini. But I digress. A little more about the car here. Ill give the short list.

RS6 Turbos
AWE Intercoolers
Milltek Exhaust
BBS wheels
Vast Tuned
And lots of RS4 parts... mmmmmmmm Carbon Fiber
And no joke by saying this, an average of 5 hours a week making sure the car is SPOTLESS. (I would eat off it, but I won't) 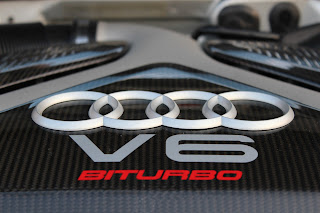 What's all of that mean? Well to the average Joe Schmoe Chevy owner? Just a bunch of WTFs. To the Audi enthusiast, it means lots and lots of roasting ricers and unsuspecting hot rodders, and the occasional grocery run. Do a search on YouTube for these cars,

Now some say I am a huge Audi enthusiast, and that I get trips to Sweden to drive S4 Avants on frozen lakes, and even have an Audi tattoo. I have no idea where anyone got that info and it's all a bunch of nonsense... NONSENSE I tell ya! Disclaimer- That's all true.

I thought this car would provide a good opening to this new idea I had. It is always a pleasure to have a car enthusiast stop by with their car, shoot the shiznit, and talk about their experiences with their ride. Even though I see this car quite often, it is still stunning in person. For those who have never experienced a Stage III tuned S4, you should really seek one out and go for a ride. You won't be disappointed. Shocked you will be!

Thanks to Brian for bringing the car by! 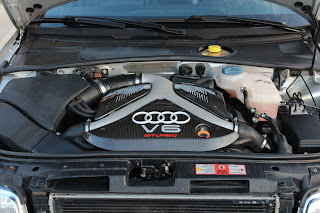 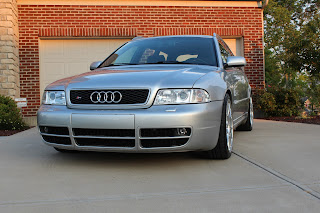 Posted by Cars In My Driveway at 6:45 PM