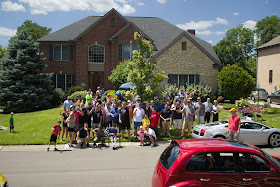 I will start this story off by saying this is the best thing I have written about so far on this page. Now this isn't my typical driveway post being this isn't my driveway, but that doesn't matter. What matters is the fact that today I am proud to be a car guy. Today, I am proud to say that this story restores faith in humanity. Turn on your local news and you will see a few things; shootings, hatred, and world problems.....maybe the latest Red's loss. What you won't see is a story like this. A story that needs to be on the news because it shows you how good people are for somebody they don't know. Prepare for tears. 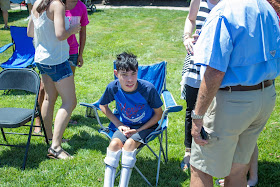 Meet Jason. Jason is a kid full of energy, something we wish we all had. I didn't know Jason a few months ago but I got a random email from a friend that changed that. A friend named Jack sent me a message asking for my help. He noticed Jason sitting outside his house one day watching cars drive by and he was always waving. This went on for a while. After some contact with Jason's parents, Jack asked me if we wanted to gather some cars together and hold a rally for Jason, just a little drive to his house so he could see some cool cars and meet some awesome people. I was on board without hesitation. After a few botched days due to weather, we finally got a perfect 85 degree, sunny day, and fired up the cars. Guess who else joined in.... the Blue Ash Police Department! After we all met in a parking lot down the street, the BAPD gave us an escort straight to Jason's house to see that smile!

Before we get to the pics though, I wanted to tell you all about a place that went above and beyond for Jason. No this isn't a paid advertisement. haha Mercedes Benz in Ft. Mitchell Kentucky. Why the name drop? Well, I have a few friends there and I thought it would be cool to drive up in a nice Mercedes Benz versus my old boring tank. I made a call to them. I don't even think I got a "let me check first" response. It was more like "absofreakinlutely!" The car of choice? A CLA45 AMG! This was a gift for me too! I have read about them and if you didn't know, I am a sucker for AMGs. This one was awesome. If you have the means, go buy this car right now. It pulls very hard, makes amazing sounds when shifting, and it looks the part too. Now, MBFM did not give us this car to use to get some publicity, they gave us this car to put a smile on a kids face. We need more places that follow this example, always willing to help for a good cause. 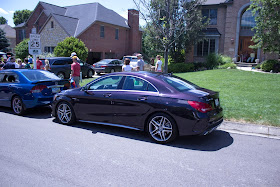 Thank you very much Mercedes of Ft. Mitchell
While on the subject of Thank Yous, a special thanks goes out to these three class acts. Officer Cho, Sgt. Noel, and Officer Schrand. These three took a few minutes out of their day to come escort us to Jason's house. They were polite, they solved the nightmare traffic issue on the street when 30+ cars showed up, and they promised to come visit Jason when they can. Again, class acts. These three are the reasons why I look up to Police Officers. They have a tough job and it's awesome to see them do what society needs them to do, be there for the community no matter what! They are the heroes here. 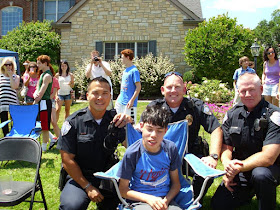 Speaking of heroes, they were everywhere at this party. Anyone remember the movie Shallow Hal, when Hal could all of sudden see the inner beauty of people? Well if I had that power, everyone at this event would have a superhero cape on. Especially Jason's parents. These two are what every parent should be like. They love their kids unconditionally and will do anything to put a smile on their faces. Pete and Lori are the definition of perseverance. In fact, check out their website at www.CelebratingPerseverance.org. Pete will be running a 100 mile marathon soon to support Jason and the Cerebral Palsy research at Children's Hospital in Cincinnati. (The best in the world too) Please stop by the website and show your support if you can! I also met Audrey who helps take care of Jason. (Another hero of mine) Unfortunately, with how busy the traffic/party/organizing things were, I didn't get to talk to them all that much. Hopefully they can have us back over in the future to hang out and chat it up. 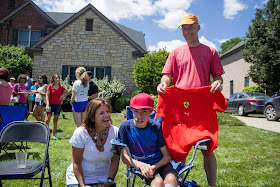 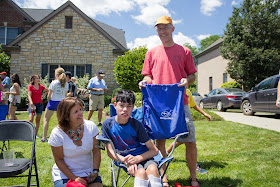 Another corporate ad here?  NOPE! But I am going to mention them anyway. When one of our participants heard about this event, he had Ferrari of Ft. Lauderdale ship a few T-shirts up for Jason. Again, not for publicity, but for a good deed. They don't know I am writing this. haha For how much Jason loves seeing cars, now he gets to wear the gear too. Pic #2 there is from two more heroes, Brian and Pam. They are ambassadors for Subaru of America and threw in some party gifts as well. Again, not for publicity, but because they are ambassadors, meaning they always do the right thing and are proud of the company they represent. Thanks again to all of you for the gifts.


Now for the cars!  Most of these people were from a local car club that does things a little different than your idea of what a car club is. These guys and gals are family. In that family, they spend lots of time together at events, races, and even random lunch/dinner meets. The best part about this group is that it's not about the cars, it's about the people. I asked the group, and the few extras that joined, to try and chip in for a donation to Children's Hospital for Jason. Right before we left for his house, one of these individuals said let's take care of the money now. I had mentioned that 10 bucks each would be awesome. As I stood there getting twenty after twenty, I realized something that I mentioned earlier. People are great, especially these people. They had no hesitation opening up their pockets to help somebody they haven't even met yet. Now, I have seen this group do road rallies and car shows, with all of the money they raise going to charity. It's always good to see. This was different though, to me at least. Nobody asked for change, nobody stood back. Everyone gave me money to present to Jason's family and they did it with a smile. One of these guys even forgot cash so he got right on the website and dropped a wad of cash to the cause. Regular people don't do that. Superheroes do. Superheroes lead by example. When a few non club members saw this as well, you could see the shocked faces. I was even short of a good round number and when one of them heard that, he opened his wallet to make it so. He saw how this group of people acted and he went above and beyond as well to help. It made me so proud that I get to know and hang out with these people.

Listen to me I am rambling, but behind all of the joy that happened on Saturday, and behind all of the participation of the neighbors, family, and the car people, one thing just keeps sticking out in all of our minds. Jason. Jason is the man here. He says hi to everyone and any time you see him, you can tell he is happy. Why is he happy????? I know that answer, and it's explained above. The heroes around him. Please stop by their page if you can, leave some words of encouragement for Pete, and thanks for reading.


Another shout out to Sweeny BMW as well. That morning, they lent a sweet car to one of their employees to bring by and let Jason sit in. Again, not for publicity, but because it was the right thing to do. You guys rock as well! (In the background in the pic below) 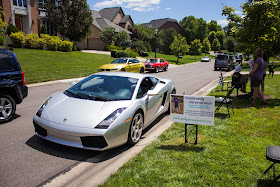 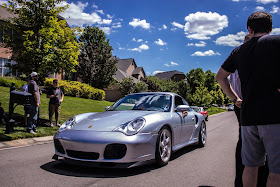 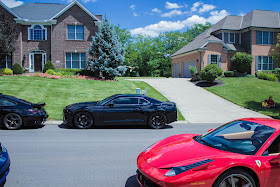 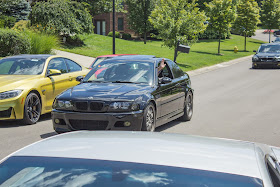 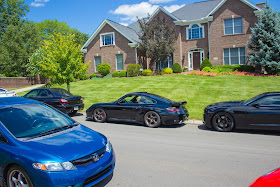 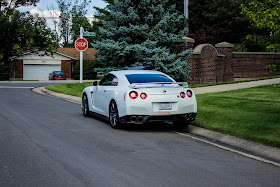 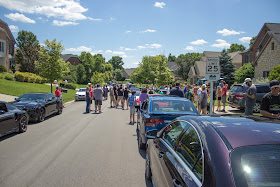 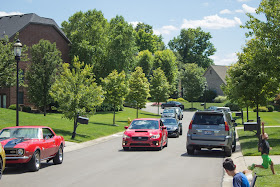 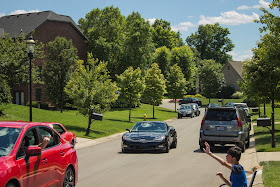 I also have to apologize to some of the car people who came. I was sooooo busy running around meeting people, I didn't get pics of all the cars. :(    I know 100% of those that came by have already mentioned this is something they want to do more of so I promise next time I will get pics of them all.