The Sleeper.... Seriously, this is the definition of Sleeper 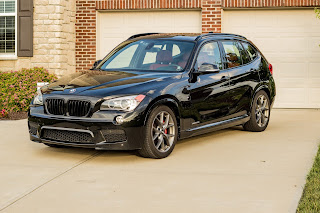 Many years ago, well not that long, the wife and I were in St. Lucia about to tie the knot. We flew down and had a wonderful wedding/honeymoon. It was a week of nothing but relaxation. We never left the Sandals compound so I was void of cars for that whole week. On the way from the airport and to the airport though, I saw a lot of odd things. First was an Audi A4 with a completely different engine that wasn't offered in the states. I also saw a pristine Supra in an area were it didn't seem to belong. What was most interesting though was a BMW that I had never seen or even heard of. The X1. I had to get a picture of it as it was actually a cab that you could take from the hotel to the airport. FYI, if you ever go to St. Lucia, be prepared for a scary ride through the mountains. (very little traffic laws) The X1 was very unique though. A mix between a wagon and a SUV. Pic is below. 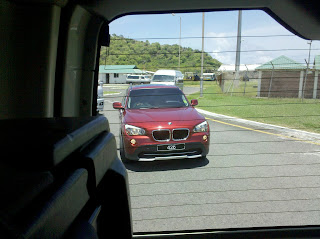 Few years later, it came stateside. What's really cool about it is you could get it with the inline 6 turbo motor that BMW fans are crazy over. This motor is very tunable for very low cost. It is seriously impressive. This X1 in the article has some of these mods but is more track focused so has some suspension/braking work done to it. Wait, what?? Keep reading. 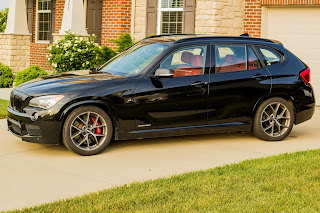 I met the owner of this machine through a few friends and started to learn about it a bit. He has put a lot of time into making sure the suspension and brakes were done right. These aren't Ebay parts made out of pewter and plastic. This suspension is no joke. Reason? This car does track day events. And by track day events, I mean it smashes cars like 911's on track day events. Yes, I have seen the video. I had doubts though. You know how it is, you see a video online of some underdog beating a faster car and you always see the same comments. "That car needs a driver mod" or the usual, "put me in that car and I'd smash that X1." So, I went for a ride. 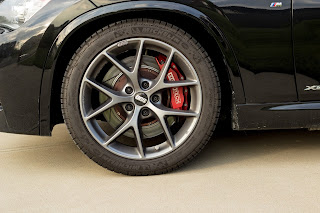 I decided to sit in on the next track day event. Now, in the picture above you will notice there are some winter tires on. The owner was in process of getting a summer wheel fixed so we had to make due. The acceleration is pretty intoxicating. For the size, it is very quick. Size..... it really isn't that big though. You would think an SUV like this would be large but it hides it well. I would venture to say my sedan is actually bigger. Now, it's no vette on the straight line performance but it will hold its own very well. What concerned me the most was how the owner kept accelerating when I would have been on the brakes by then coming into a corner. This is the moment I realized a few things.

1. Crazy shit is about to go down.
2. I may have made indents on his door armrest
3. The only time I have felt that kind of cornering was when I rode in a buddy's R8
4. This kid can drive!
5. I cannot confirm or deny that I peed a little bit. 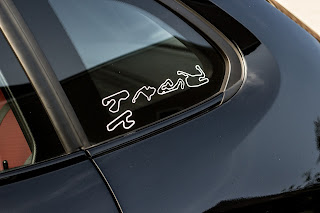 I was super impressed with how this thing took corners, especially on tires not designed to do that. It was an eye opener that I need to get a car to start doing track days, immediately. It has been a few weeks since that ride and I still can't believe the physics of what happened. It just goes to show you what a properly tuned suspension and brake package can do for a car, that being more important than adding a bunch of power in most cases. Also, the driver mod helps as well. The owner had complete control at all times and even though I was saying Holy Shit about every corner, I felt as if he knew what he was doing. The track day stickers prove that as well. Now, when I look back at those videos online of his track days, I know the underdog is passing those cars because he/it can! 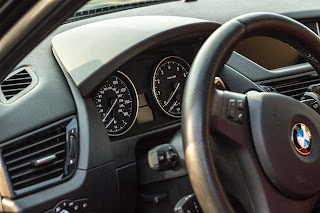 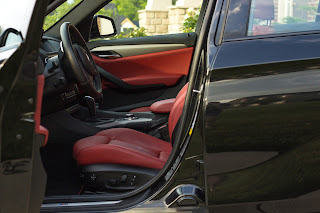 What makes this track day beast awesome is the fact that I can bet its the most comfy car on that track. The interior is very lush. Great color combo on it an very user friendly. This thing is a sleeper in every aspect, which is my style. Love it. 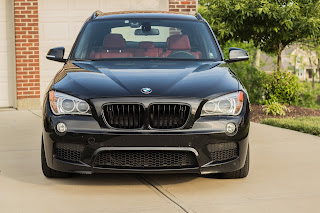 Sorry to the owner for taking so long to put this up. Vacation, work, and everything else has kept me from getting it done. More cars are coming soon as well so stay tuned. Thanks again to the owner for the ride, again, it was amazing how that thing took corners. When BMW says the Ultimate Driving Machine, they are talking about this, not an M3. haha

Posted by Cars In My Driveway at 8:40 PM