Pontiac, Holden, GM? Call it what you want... I'll call it fast! 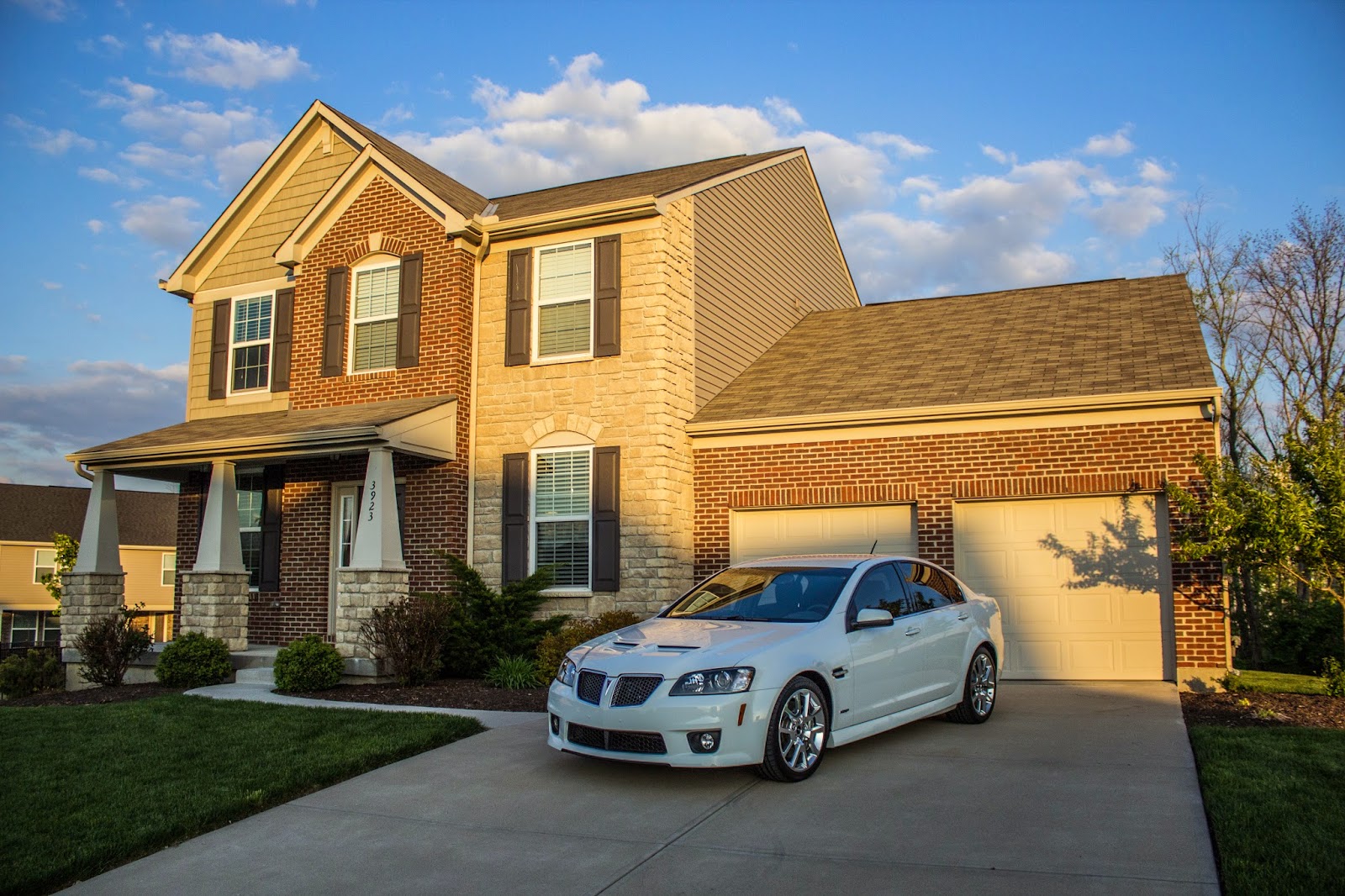 Almost everyone who is a car enthusiast has a story about a Pontiac at some point in their lives. Doesn't matter who you ask, either they had a Pontiac or their best friend's dad had one. Pontiac has been around for ages, yet now it is gone. The economic crash of 2008 put an end to their run. Enter the G8, which came out at possibly the worst time in GM's long history. Pontiac being cut out may have hurt the hearts of many, but the crash of GM hurt their wallets. The G8 was basically doomed before it started, which sucks because it really is a car that should have taken off. Australian chassis, rear wheel drive, and a big ol' Merican V8 made a recipe for a very sweet ride. 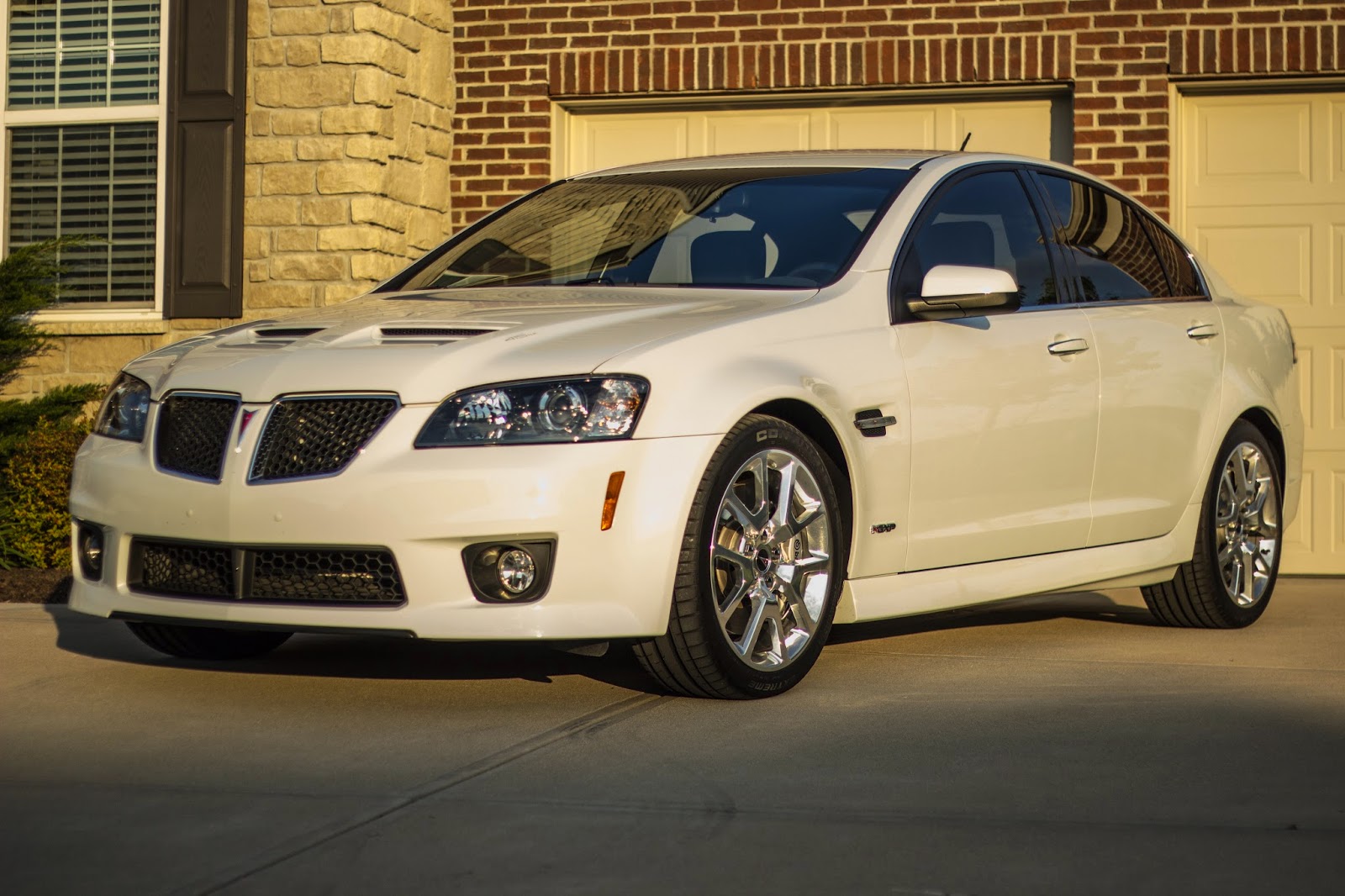 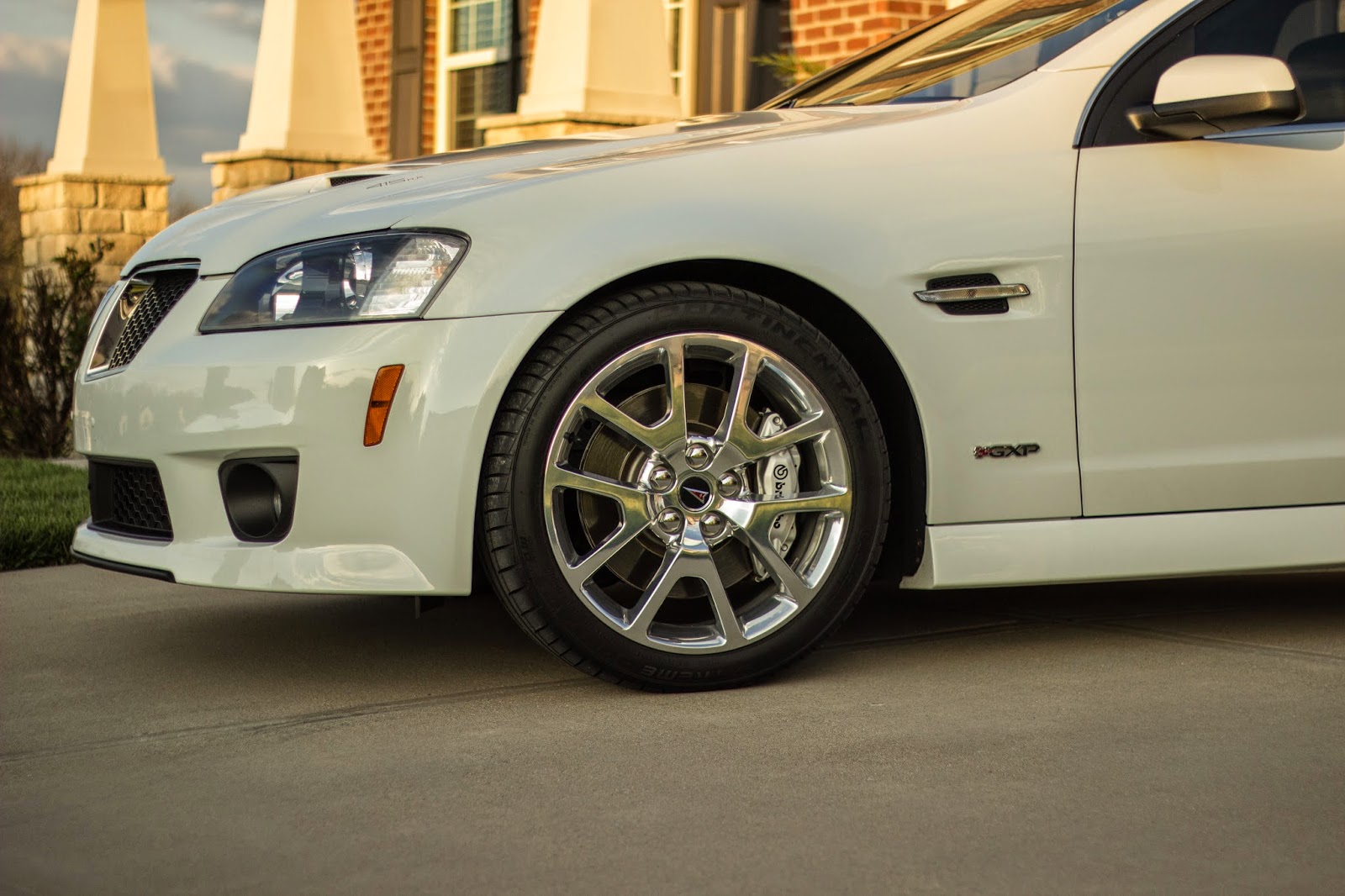 In the past few gens of the Pontiac Grand Prix, there was not much to write home about. They were front wheel drive cars that looked like the designer had thrown some clay on a table real hard and said, "Done!" Buying one was basically buying an Oldsmobile with a different look. They were boring, but they could lay a FWD patch pretty good. A friend back in the day had an Olds Ninety Eight and that car was beaten hard. It wasn't Euro luxury but for some high school kids cruising round town, it was awesome! Few years out of high school, I had to rent a car and got a Grand Prix. It was almost identical on how it felt compared to the old.... Olds, except it smelled of B.O. and cigar smoke. I hate rental cars. The G8 was a complete turn around. Imagine eating a $1 frozen pizza from the grocery store, then stepping up to some Chicago style pizza in downtown C-town. It's the two extremes, opposite ends of the spectrum. That's what happened here. GM thought, "Hey, our Grand Prix is boring as hell, let's take the Holden and rebadge it and sell in the US!" 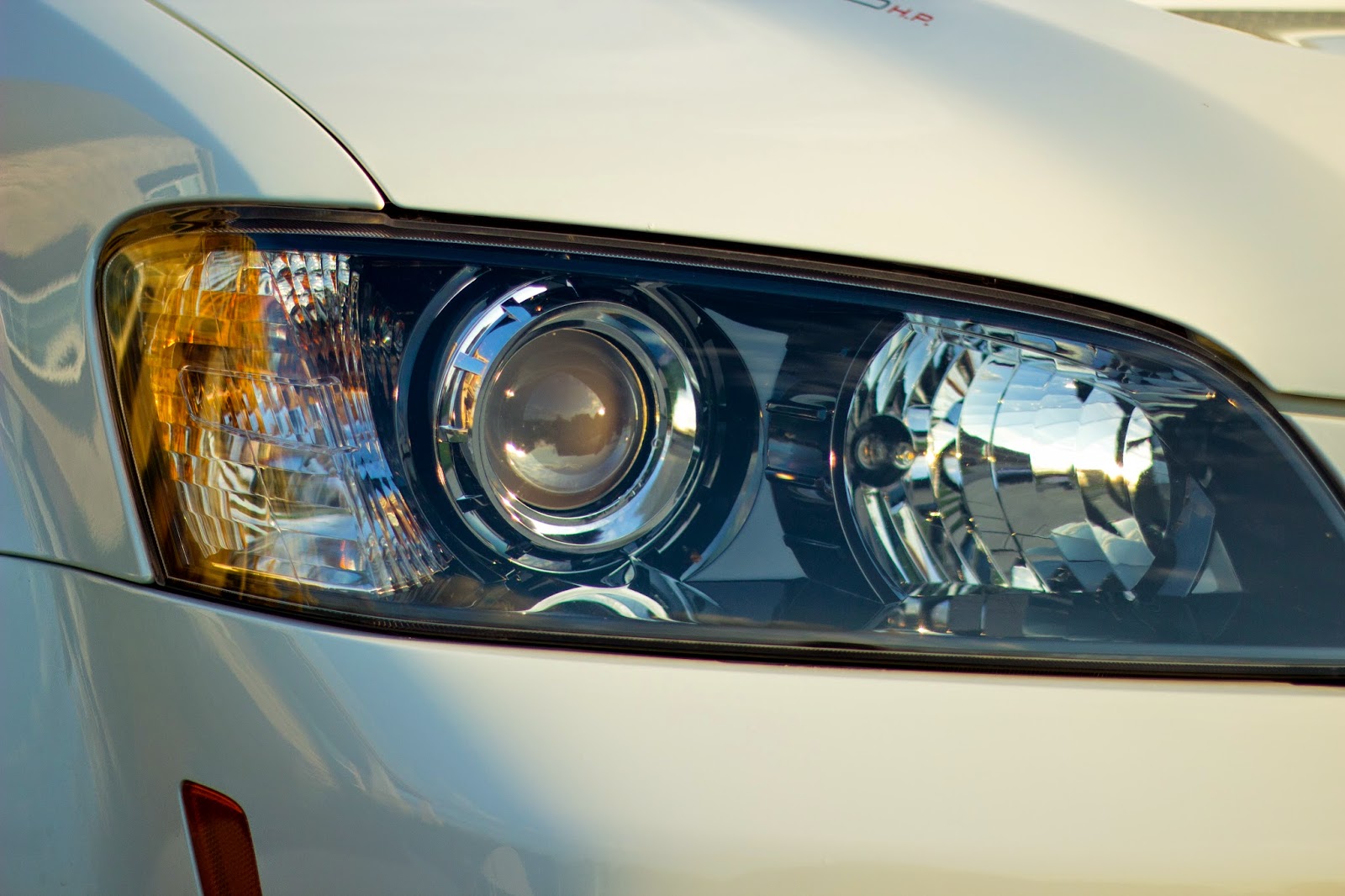 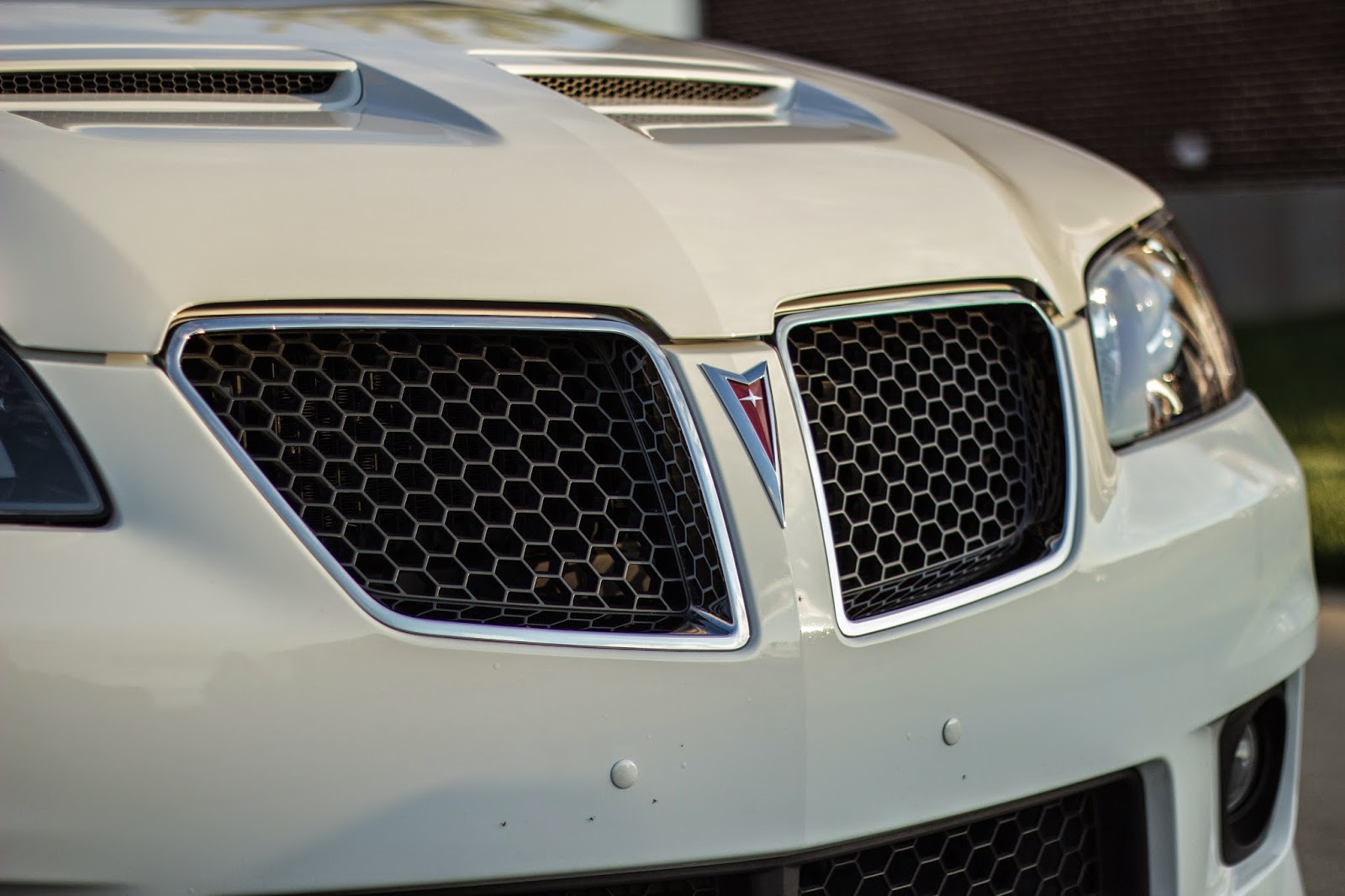 Holden is a subsidiary of GM in Australia. GM took one of their chassis' and decided to sell it in the US as a replacement for the Grand Prix. It was now rear wheel drive, and could come with a LS motor in certain models. This example is the top of that line. This is a GXP model which comes with a 6.2 V8. Let me repeat that. A 6.2 V8. Now, if you have read other episodes on here, you know that I am a huge fan of the fast, sleeper sedan. I had a blast in my AMG Benz, which had a big V8 as well. People's eyes would expand greatly when I told them how big the motor was in my C55. This GXP puts that to shame. Now, around this time as well, AMG also was putting 6.2 motors in some of their cars. Think about it, as most daily driven cars are in the 2-3 liter range. 6.2! Haha. What's even better is Pontiac didn't want another Fwd, boring car so this was given the tail happy option, very similar to AMG and BMW M cars, but for a lot cheaper. This car was a bargain for what it was. 400+ horsepower with probably the most mod friendly engine around was a recipe for badassness. 2008 saw the crash of the market, and so the G8 was gone faster than you could say burnout. 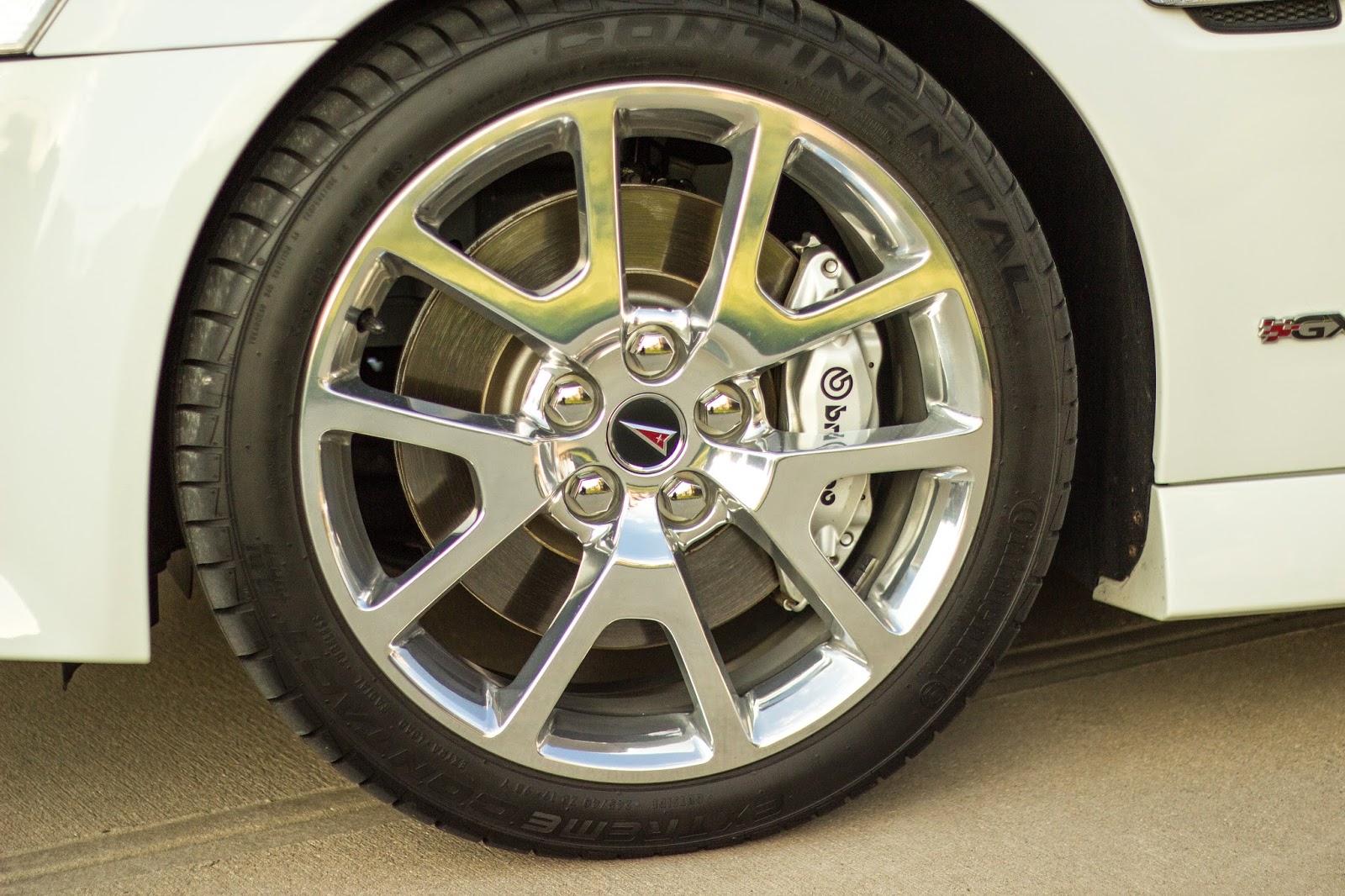 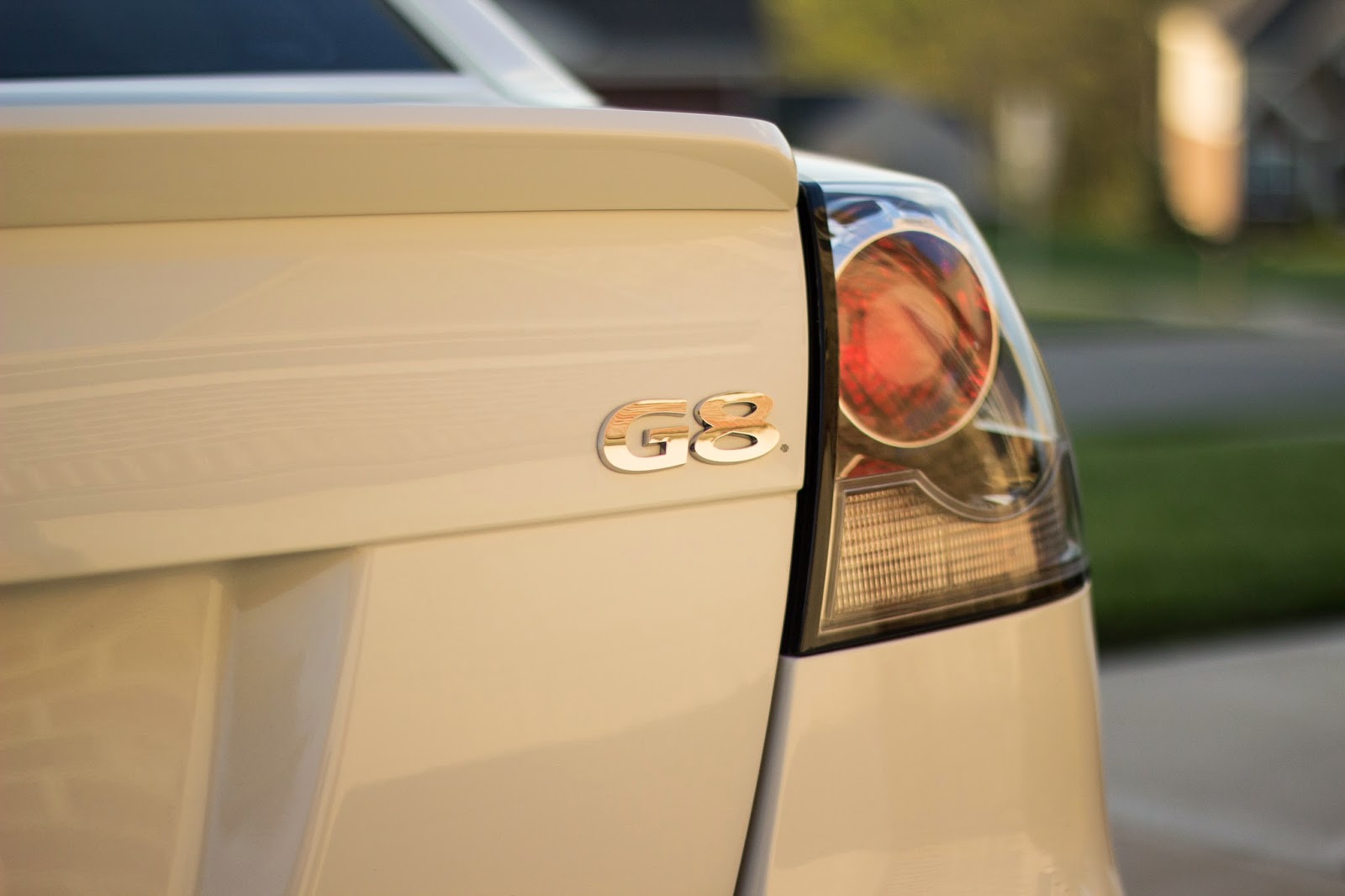 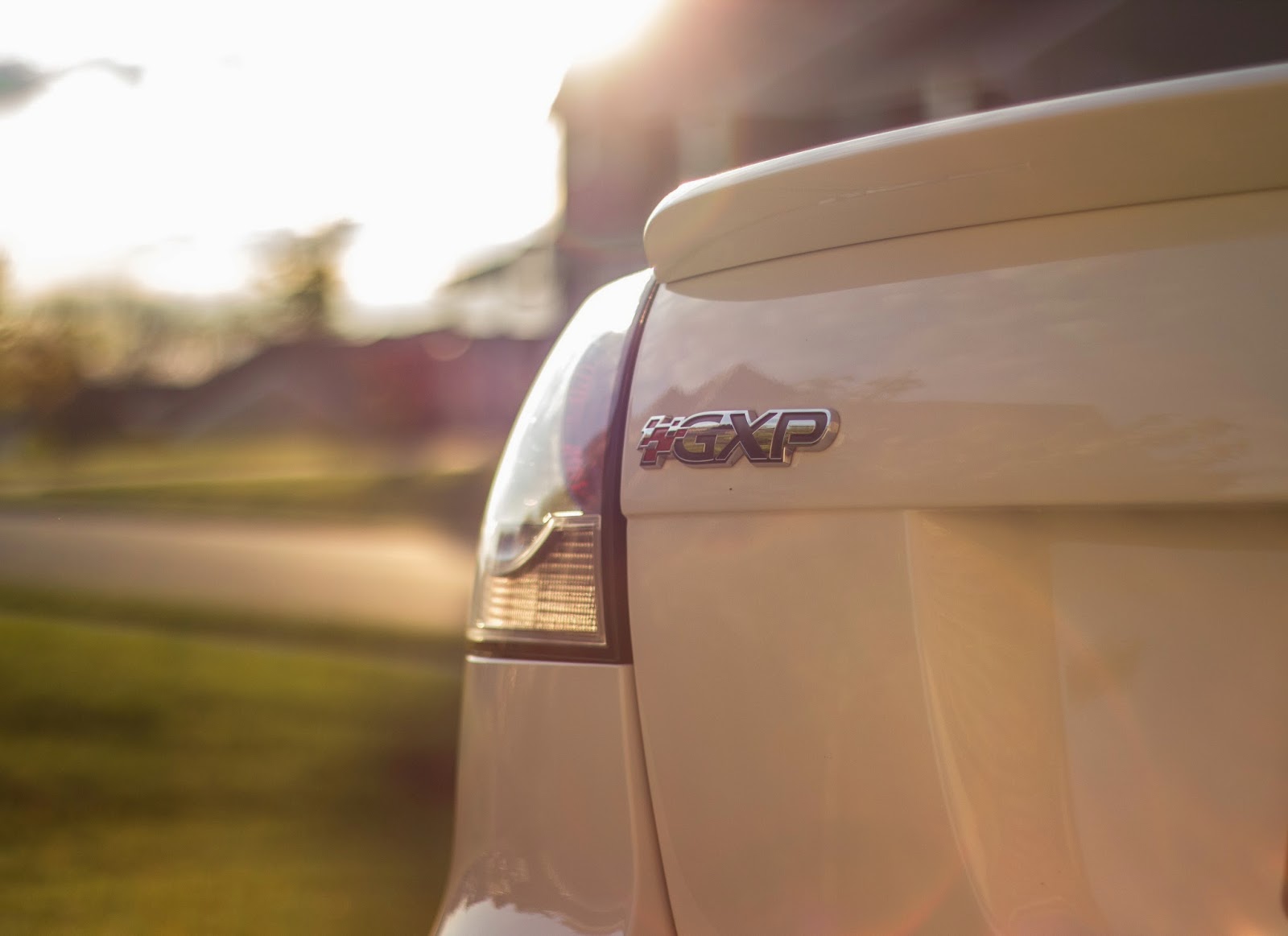 What a good looking car too. Most Pontiacs in the 90s/00s looked like complete mud butt. This was completely different. This example is the GXP which has a lot more goodies than the standard version. Better suspension and brakes just to name a few, but most importantly, that massive motor. The best part about the motor is the amount of mods that can be installed for a relatively low cost. Actually, no, that isn't the best part. The best part is the sound when this motor is able to breath. The only way I can explain it is with the word, "healthy!" This car is a burnout monster. With that much power going to the back, one can only imagine how much fun this car is to drive when Rosco and Boss Hogg aren't looking. The interior is not cheap looking either. The dials are fantastic and the seats are very sporty looking as well. Sorry, my interior shot didn't turn out well. Still learning this new lens. I really love cars that you can thrash and have a blast driving, but when the blue and red lights come on, it doesn't yell, "pull me over." 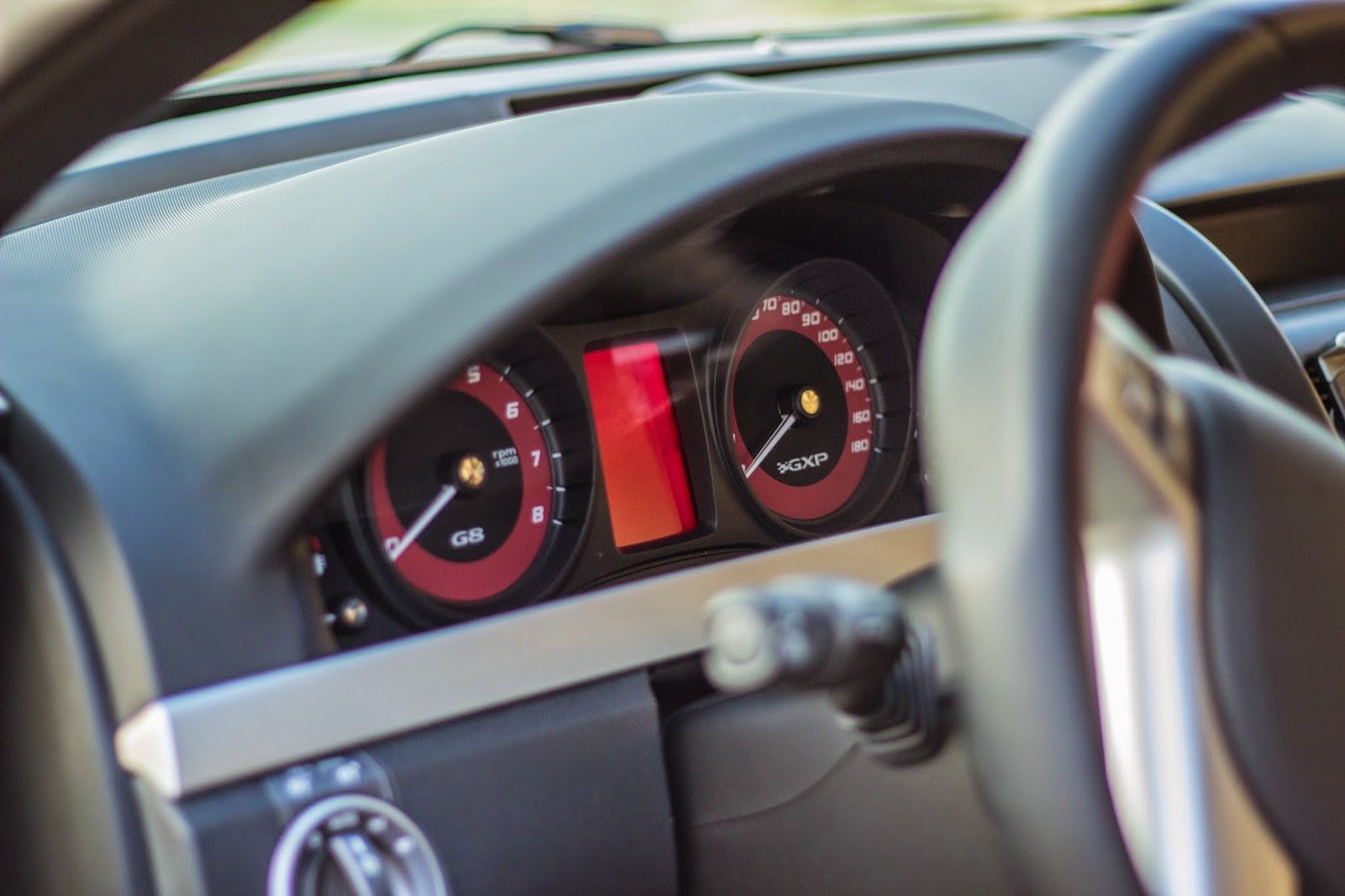 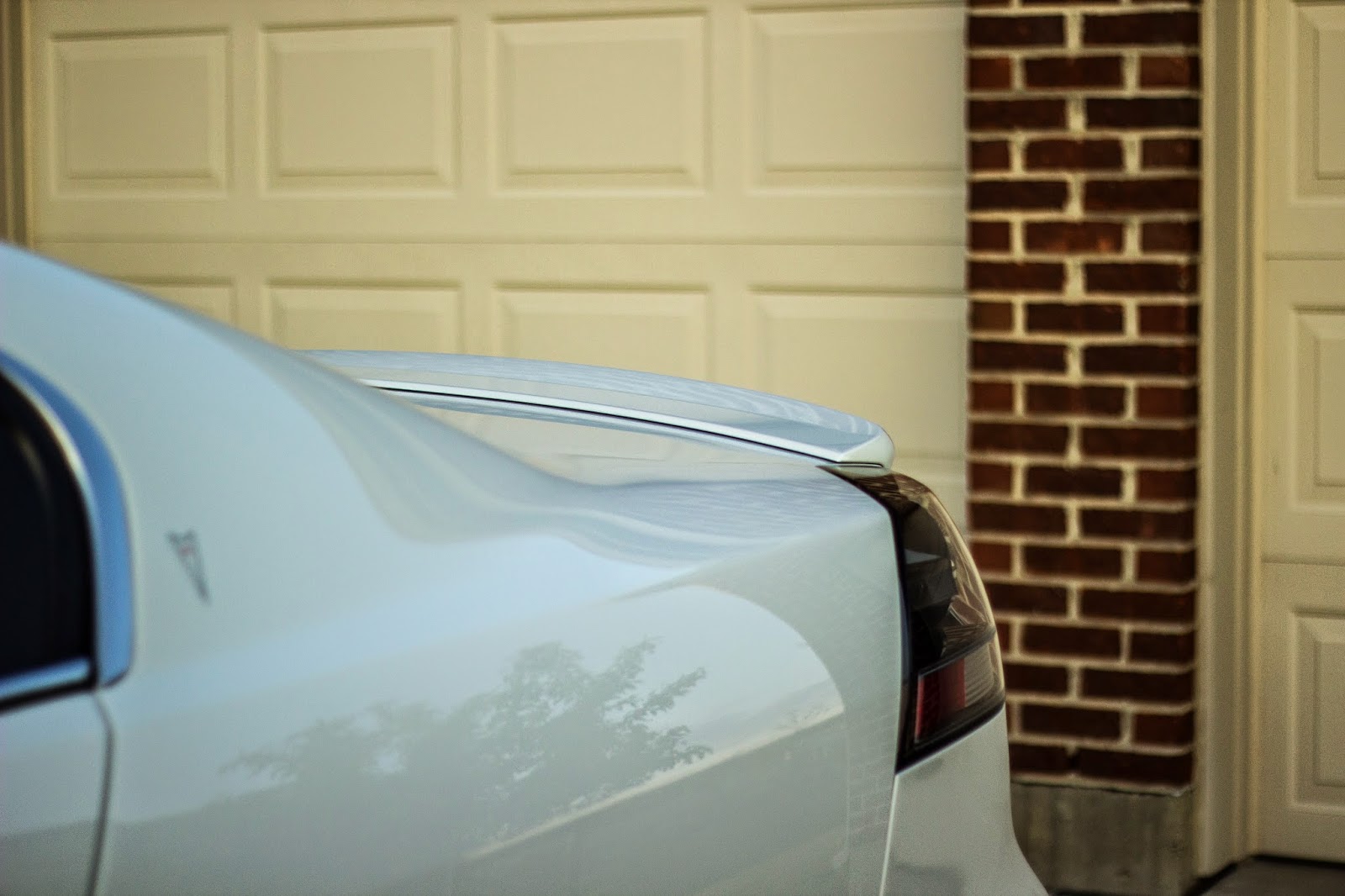 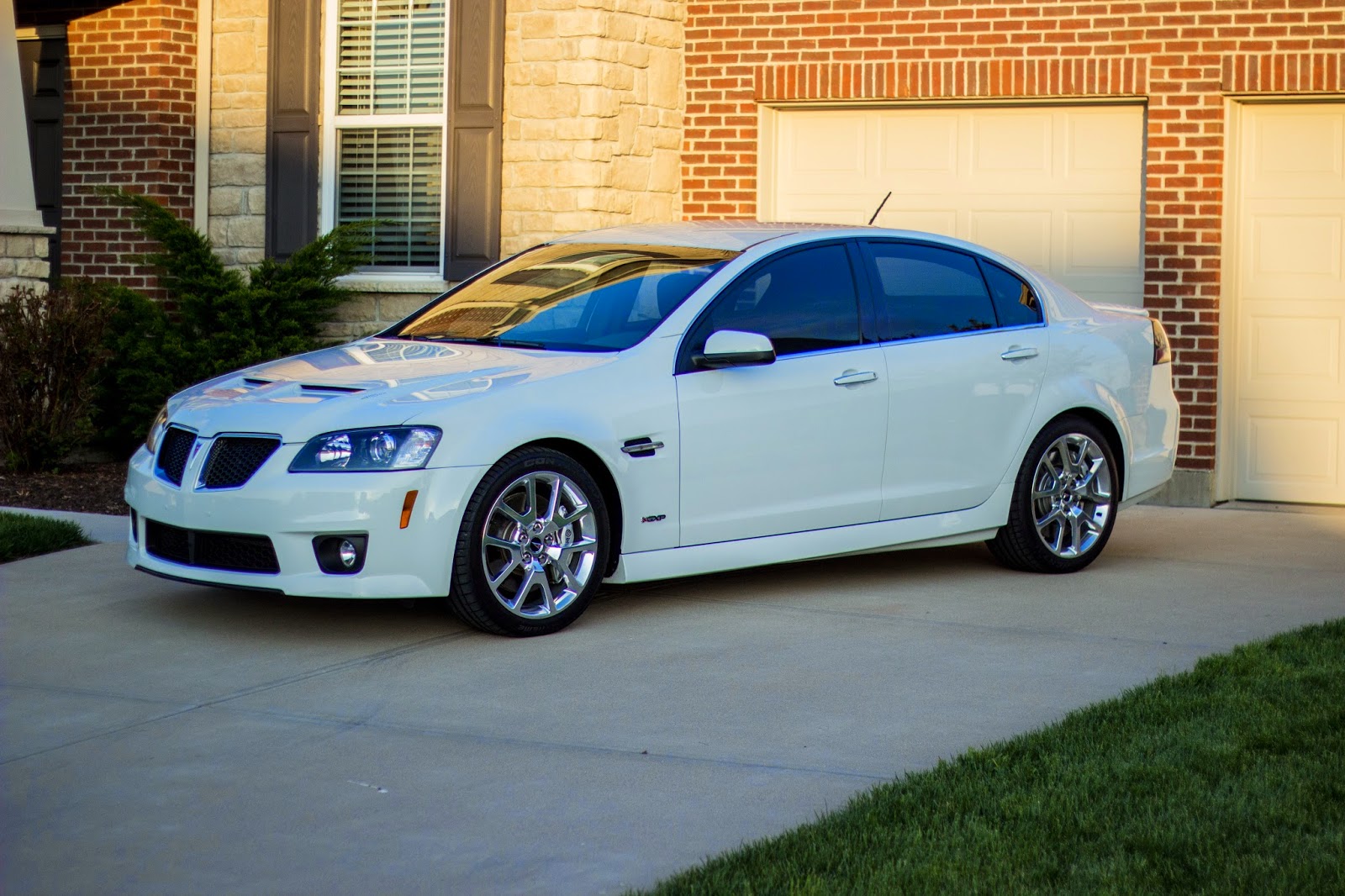 Thanks to the owner for bringing the car by. I really, really like this G8 and it's nice to actually see a GXP which is rare, with I believe only 1800 ever made. It sounds fantastic and looks great too. I am not a big fan of white cars, although I actually have a white car now, but this one really pulls off white very well. It will turn heads, especially cruising by at wide open throttle. What's even better is the white smoke from the rear wheels roasting matches the paint. I'll end with my favorite pic I took of the car. Thanks for reading. Please share the Facebook page and feel free to comment! 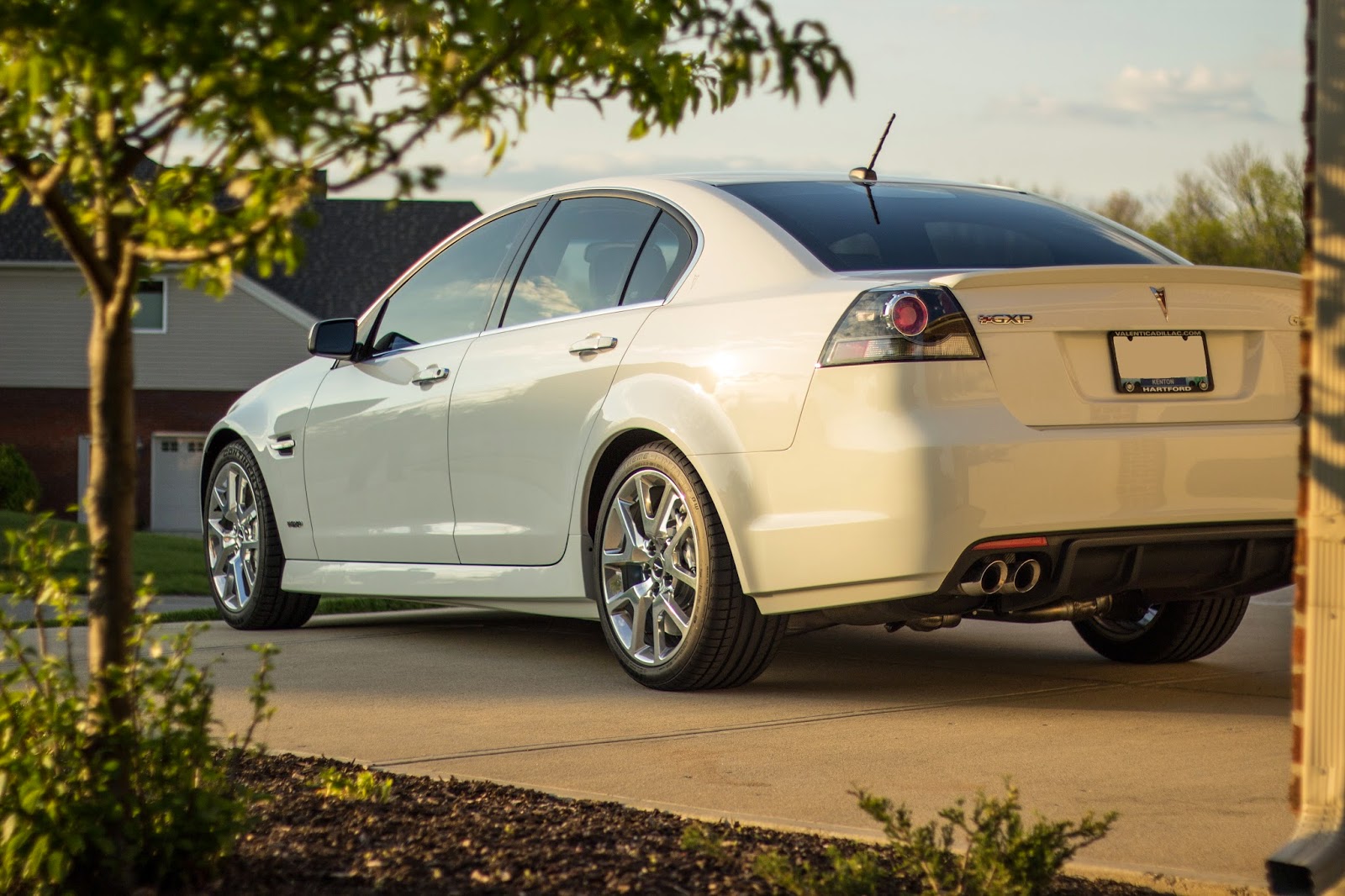 Posted by Cars In My Driveway at 9:22 PM