A few years back, 5 to be exact, I decided to uncork my passion for Audi by setting up an annual Audi meet with the local enthusiasts. The meet was very unorganized and at my first house. I lived on the corner of a main neighborhood street in the back of the hood, with a farm on the other side of the street so we had plenty of room to park and not much traffic to worry about. There were no more than 20 cars or so, a grill with burgers, and yes, I supplied a keg. (the event was at my house, so I didn't have to drive home!) This is where I first witnessed an R8 in person. 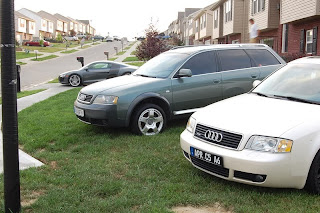 That picture was from my old driveway so it still counts.

This story today will be about a car/cars, and a very trusting person. When I first met this person on a local Audi enthusiast site, I could not believe he was going to bring his R8 over to my house for our first meet. To be honest, I think 10 out of the 20 cars that showed were there just to see the R8. I kept the driveway clear to offer up the safest spot for it. As you can see in the picture above, my allroad went grazing in the grass to make room for the R8. At the time, the R8 was fairly new. It was the exotic Audi. Now this part is hard to explain unless you have witnessed this as well. In pictures, the R8 looks really, really cool. In person, it looks completely different. Seeing the car come down the road towards you with the LEDs on is just flat out menacing. The car is wider, lower, and meaner when you see it coming towards you. So the owner, let's call him Richard, was extremely nice and as I said earlier, trusting. I recall a conversation I had with him within the first ten minutes of drooling over his car. I asked him if I could sit in the car. He threw me the keys and said, "Take it for a spin!"

Seriously, that was his response. I remember my conscience saying don't drive it as I just had a beer. Politely I confessed, telling him I had a beer and don't want to drive after that out of respect. His response was even more hysterical. "Take it for a drive, you BLANK!" I will leave the last word hidden but it was a word that expressed how much of a pansy I was being at the time. So not only did I get an R8 over to my house, he also let a bunch of us drive it!

Richard and I have become great friends since then. Not because of his cars, but because he is somebody who I just get along with and he loves anything with an engine. This guy will talk cars with you till you realize you have to be at work in ten minutes. He also DRIVES his car, rain, shine, or snow! I am sure many people that have exotic cars keep them in the garage and only drive a few miles on a sunny, Sunday afternoon. Richard is the opposite. His opinion is that these cars are built to be driven. They are!

Before I post another picture, I have to set it up a bit with another Richard moment. That's what I am going to call these stories now, Richard moments. Haha So, he decided to get a little more power out of the car. Cue the Heffner Twin Turbo kit..... yeah, yummy. Just an FYI, if you haven't heard a twin turbo Audi 4.2 V8, go find one. Thanks me later. Unfortunately, a poor shop install and tune on the car forced a lot of hiccups, but even so, the car was quick. The car had to go though. This was a daily driven car so the turbo was out, and a new R-tronic V8 was ordered. The day he picked up the new ride, which you will see in a few, he gave a shout to me and another Audi buddy. He told us to come pick up the turbo and go racing at the local drag strip.

Seriously, he did. And seriously, we did! hahaha The best part about this wasn't the fact that he trusted us with his car before he sold it, or the fact that he was telling us to go have fun with a twin turbo R8. What he said as we were leaving gave us all a chuckle, and still does to this day. "Don't hurt the brakes!"  Yup, carbon ceramic brakes, which were being switched over to the new car the next day. Holy F my life, the brakes are incredible. 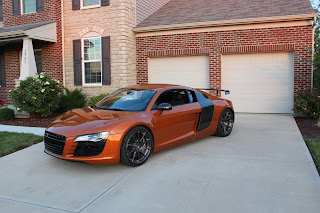 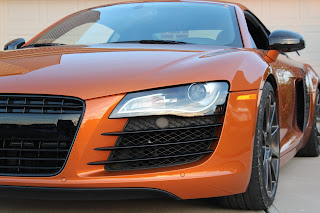 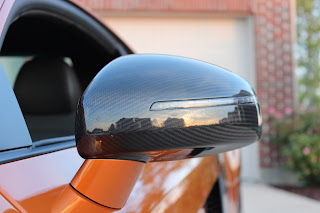 This car is a head turner. Everyone looked or commented as we were hanging out in the driveway. It has a presence that is impossible to explain. It is just so good looking. The color is unique, the carbon fiber is everywhere but not overwhelming, and the rear end of this car will make you think about breaking up with your woman for it. I really can't say enough about how this car looks, drives, and sounds because I don't think I have the necessary vocabulary to describe it.

One more story and then I will just leave you with a bunch of pictures. You will see below the picture of the rear window with stickers on it. No, it is not those silly pictures of your family, like 99% of minivans display on the window. These are the car enthusiasts stickers. Stickers showing what tracks you have been on. Yes, this car has been to many, and has been driven hard. Again, another great thing about Richard. He drives this car the way it was intended. So a neighbor and I stopped up to his shop one day to lift up my C55 for some possible exhaust work. We decided to go to lunch, with me riding in the Samoa, and my neighbor riding with the new owner of the Heffner R8. Quick side note here; I have been in a few really fast cars, from a extremely tuned 911 turbo to a Noble M12. The Noble took my breath away with how it handled at high speeds. Okay, back to the lunch ride back to shop. I will be short and sweet. The car handled an exit ramp so well, I had to change my undies when I got home. I had never experienced anything like that around a corner. I saw flashes of my life, followed by a UPS truck, followed by excruciating pain in my hand from squeezing the "oh shit" handle so hard. To be honest, I still to this day don't know if there is an "oh shit" handle in that car, but I sure as hell made one. I now know what that car is capable of and that's why I LOVE it! The R8 will always have a spot in my heart. Yes, it is not the fastest exotic on the road, but it has the presence of one. You can thrash this car on a track without always being on a knifes edge. Few more pictures to satisfy your thirst...... 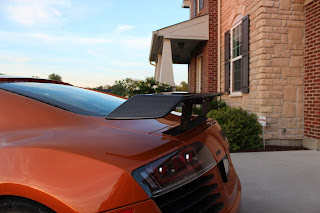 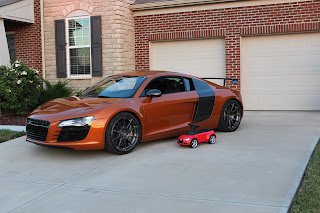 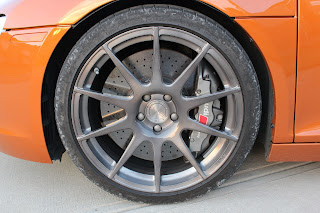 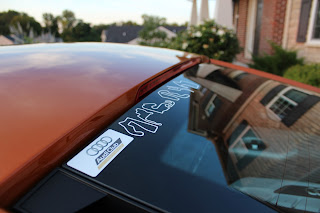 Thanks again to Richard for bringing the car over. It is always nice hanging out and talking shop with him. I have some incredible stories thanks to him and wish him and his family the best in their future endeavors in the sand dunes!
Posted by Cars In My Driveway at 4:42 AM